Year of the Lord's Favor 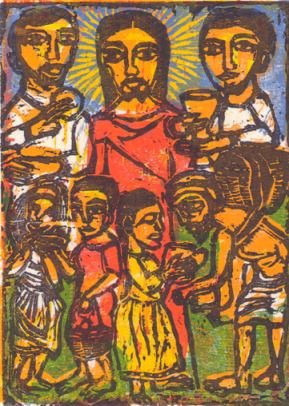 Medium.com editors called this past decade “the whiplash decade”. The imagery of whiplash is apt to describe not only the 2016 election results, but also a nationwide reckoning with the divisions present in America since its inception. In contrast to this idea of a whiplash decade, Jesus -- the one we wait for and hope for during the present Advent season -- declared nearly 2000 years ago that the “year of the Lord’s favor has come” (Lk 4:19). How might we understand favor in this decade ripe with feelings of whiplash?

In the Third Gospel (“Luke”), we see an abundant mention of the concept of "favor", especially in the early chapters where God shows favor to the women Elizabeth (1:24-25) and Mary (1:28, 30, 48), promises favor for all peaceable people (2:14), and then shows favor to Jesus himself (2:52). This theme reaches an emphatic climax in Luke 4 when Jesus declares that “the year of the Lord’s favor” is among us, explicitly applying to the poor, captive, blind, and oppressed (4:18-19). When he gives an example of what he means, naming God’s past favor on a Syrian foreigner, the people want to throw him off a cliff (4:27-30).

Why is there such a stark reaction to this idea of favor? I think it’s because we cannot read the word “favor” without thinking of its negative cousin “favoritism”. The polarization of our current political climate embodies favoritism. Political candidates and parties certainly apply favoritism when deciding which people groups are valued, who fairness applies to, and even who is considered a human deserving of human rights. This played out in a scary way when the recent vote for impeachment, meant to consider factual evidence, was suspiciously but unsurprisingly along party lines. This favoritism, either for or against the current President, meant that less than 1% of the House voters broke party allegiances to consider facts and evidence. This is a dangerous example of favoritism gone wrong, and both prominent political parties are complicit.

When Jesus spoke of God’s favor for the Syrian, his Nazarene listeners heard their own people group being excluded. Declaring favorites must mean that another is excluded, right? And yet we see something interesting later in Luke's gospel. Perhaps the most famous of Jesus’ parables tells the story of a father with two sons in Luke 15. In this portrait of family dynamics and a graceful father, there's a question of who is the favored son. But as the story reaches its ending, we see that there doesn't have to be a single favorite. To favor the prodigal son, showering him with forgiveness and an elaborate party, the father does not exclude the other son. In fact, he declares “all that is mine is yours” (15:31). It's the older son's own psychological barriers that cause him to jump to the conclusion of exclusion. He imagines that favor is a zero sum game and that his father’s extravagant grace toward the younger son leaves none for him.

If we return to the most central verse about favor in Luke's gospel, we see God declaring favor on the poor and the oppressed (4:18). Mary’s own reflection on God’s favor toward her, a poor girl in a society that didn’t value her, includes similar ideas of God’s favor for the poor and hungry (1:52-53). Like the older son in Luke 15, we might be tempted to hear these verses as excluding the rich and powerful, and to imagine God’s favor as favoritism. But this message of favor is not calling for the exclusion of the rich. It is only when the rich cling to existing hierarchies of exclusion (which give them an advantage over another) that they'll have a problem with favor for the poor. If we instead eradicate zero sum thinking, we can believe that there’s an abundance of favor available for all. We can then imagine possibilities for rich and poor that don't fall into the polar opposites of today's rhetoric. Imagine a world where God's preference for the poor is not a threat to the rich, but perhaps an invitation for the rich and poor alike to co-create a solution to wealth disparities.

God's favor has a more common name: Good News. Does this news sound too good to be true? Would we rather believe in the news of ever growing dichotomies, of ever growing gaps between people? Zechariah didn't believe that God would show so much favor and deliver on such good news (Lk 1:19-20).

Rob is a leader & founding member of CG. His weekdays are spent at Spotify but the rest of his time is spent traveling, exploring the NYC food scene with his fiance Jocelyn, and reading about theology and spiritual practices. Rob's interest include community development, theology from the margins and the ways all religions can authentically, faithfully and ecumenically practice their faith in an increasingly secularized society.