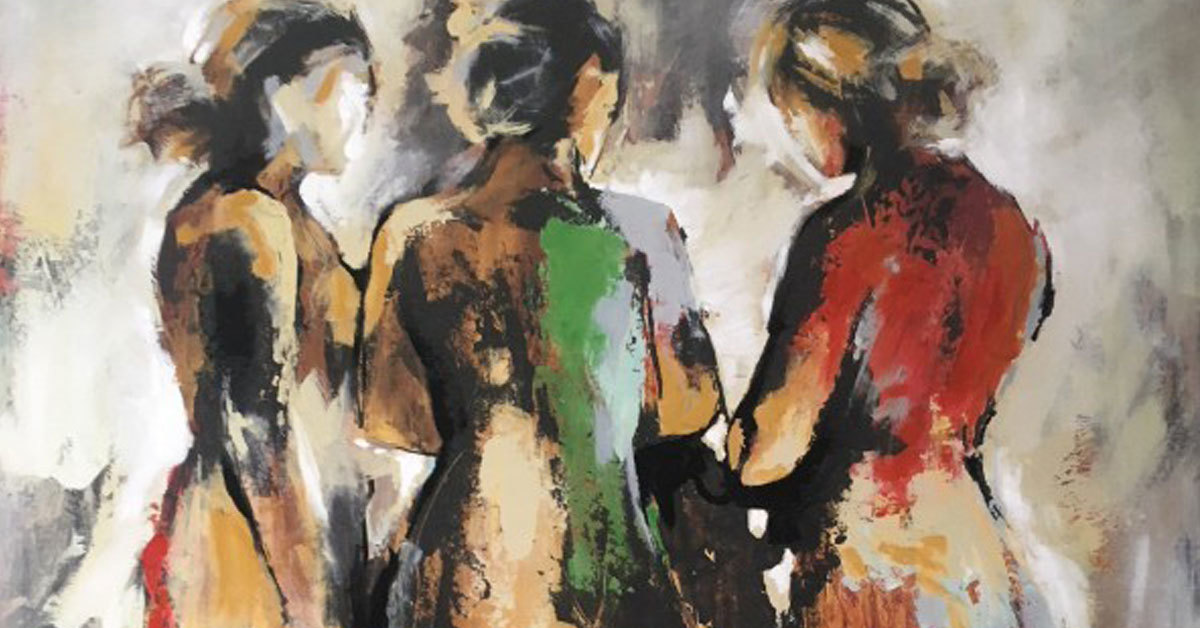 A couple weeks back a video circulated the internet of John MacArthur telling a female preacher - Beth Moore - to “sit down”, because “there’s no case that can be made biblically for a woman preacher.” Rather than a room aghast & offended, his reply was met with raucous applause and laughter. Just so we are clear: this didn’t happen in Alabama or somewhere else in the Bible Belt. No, it’s late 2019 and this happened in Los Angeles.

If by chance you’re familiar with MacArthur and this scene, I hope you're recovering and continue to recover from the nonsense he's spewed over the course of his life. It is bad, bad news. For those reading this who don't know MacArthur's brand: that's a good thing and I say continue to avoid it.

Unfortunately though, this is nothing new for John MacArthur – an influential Southern Baptist minister & president of Masters Seminary. In fact MacArthur is doing nothing more than what he’s always done: work tirelessly to deliver to itchy ears a Bible that celebrates ‘biblical manhood’ while keeping women & non-males from positions of leadership in the name of God.

Still to this day, some very poorly constructed arguments against non-male ordination abound and are received at face value in American Evangelicalism. Everything from (trigger warnings here) women being too emotional, pretty women being too distracting and feminism promoting liberal, non-biblical agendas – opinions of women developed in Victorian Europe still hold influence in our storied faith. Our tradition follows prophets who kick down doors that deny access, flip tables and create inequity, expand tables so all can eat, and reject hierarchies where culture affirms them, yet modern American Evangelicalism continues to look like an alternative universe akin to The Handmaid’s Tail.

In the short time I spent in Evangelicalism I gained firsthand views of their ethos.  I attended their leadership conferences, listened to their influencers, and even planted a church before God shattered my narrow, immature faith. Churches like my first think themselves corrective critiques of an overly-liberal society. They also see MacArthur (and others) as prophets, and here’s the confession: as much as I find his words repugnant today, I once respected them.

Working in NYC and living on the other side of the Hudson in Hoboken, I began my faith journey in my late 20s at the only church in town that I could find on the internet. A church plant belonging to the Southern Baptists and sent by Tim Keller, this now-megachurch has familiar attributes: charismatic white pastor with answers to every question under the sun and usually accompanied by pithy, alliterative one-liners. When it came to women leading, preaching and pastoring - the answer is simple: God did not make women for it & the Bible makes that clear.

The first time I asked why, he excitedly explained that 1 Timothy 2 clearly prohibits women from leading men. Rather ignorant to the powers at play in this argument, I noted that this same verse also prohibits women from enhancing their look (makeup, hair, etc), wearing jewelry (earrings, gold, pearls), and dressing nicely. This was not well received. After fumbling through a response he concluded that the first half of the verse is durable and true, while the latter parts are strictly cultural, thus transferable to today. Convenient argument. I remember not buying it, but I'm also quite argumentative so as a brand new Christian with a whole host of other mess I wanted to address in my life, I accepted these Fundamentalist points for the time being. In short, I relegated this issue to the back-burner. And let’s name that elephant in the room too: I am a straight, cis male. I can afford to. I allowed this, though unattractive and incompatible with the world I believed in, to be secondary to the things I wanted out of church.

Though after this, I grew increasingly uncomfortable with the church’s culture. Women were treated as secondary. Women were discussed openly 1) with words like ‘fragile’ and ‘pure’ in need of male protection and leadership, while simultaneously 2) objects that, if close enough to one, could derail a male’s purity. In short: no mutuality, no equality and no equity. No gospel.

The gospel, at least as I understood it, crashed violently against this structural inequity and marginalization this first church actively enforced. Suddenly I was beginning to notice the water I was swimming in. Furthermore, as a man raised by a single mother and an older sister - and with no male role model in my childhood - my world’s been shaped by women. My lenses have been oriented to see the eternal strength and grit of women in a male-run society. Reared and shaped by courageous, independent women who spent their lives resisting America’s  lazy, misogynist tropes, I was now working for a church that perpetrated such tropes. And now they had even greater tools of manipulation to enforce their policies: God and God’s Word.

I want to drive this point home: beneath all the loud rock songs, hands in the airs, tears streaming down the face, excited greeters, effusive smiles; beneath all the programming, social events, charismatic sermonizing with choreographed emotion and the 3 application points; beneath the lightshow & one liners of these megachurches...there it is: a vicious theology that subordinates non-males and questions their testimony. And this exclusion was allowed to exist only through people like me who were  certainly suspicious and dissenting of the theology in place, but ultimately remained silent on the matters.

All of these existential crises that began piling up came right around the three year mark of my new faith, when I was brought on staff to plant a church. And within a year of getting on staff, I basically worked myself out of a job. Now that my brain had caught up to my faith, the issue of women in ministry (and now about ten others) was no longer something I could stand with. For my integrity, but more for women, I needed to evaluate my allegiances and tribe. I had to get out.

Friends, please look at our times. If these last few years have shown us anything it’s that destructive, exclusionary and morally reprehensible positions don’t self-correct. For example: the Trump Administration, the Southern Baptist Convention’s #metoo moment, Roman Catholic Church’s #metoo moment, Harvey Weinstein’s continued empire, etc.  They need to be abandoned. More: they need to be boycotted. They need to be organized against. What they do not need, is our passive disagreement. In fact, these things thrive with our silence and secretly-dissenting participation in place. The Protestant megachurch industrial complex is thick and durable enough that when churches are faced with crises of character, the membership tends to trust the leadership over the victim again, and again, and again, and again. Sadly, this is not a new story.

So friends, let’s not scoff at John MacArthur sounding like he’s stuck in the 1600s. I ask you to take his thoughts more seriously. If you see yourself in a different tribe than he, but currently attend a Protestant church that won’t ordain or hire a woman pastor, I ask you to consider your allegiances & memberships, as well as where you put you money and what voices you listen to. In short, there are deeply troubling downstream consequences of a theology that subordinates women.

A theology that sees a woman as less reliable & trustworthy than a man allows for moments when a woman alleges assault or harassment, and her testimony is treated as just that: unreliable & untrustworthy. This is not a fight over abstract theological talking points. This is a battle over the toxicity of denying a woman’s testimony of sexual assault. It is not an accident the Southern Baptists are having their own #metoo movement right now, and it is not an accident they are royally screwing it up. Women will continue to be systematically silenced, disbelieved, dismissed & subordinated until we confront this sickness in the faith.

So where do we go from here? If you are anything like me, the community is great and the sermons are ‘engaging’. If you’re anything like me, you’re ‘taking time to wrestle with the issue’. Maybe you’re even involving a few others. So, ever a sucker for action points, I offer up a few:

1. If YOU believe Women and men are equal in all ways, and YOUR CHURCH does not, please take a stand immediately: STOP ATTENDING. Let your solidarity be active & explicit.

a. Churches like my first in Hoboken depend on your implicit & tacit support. Trust me when I say your secret, silent dissent does absolutely nothing to structurally effect change in that organization.

b. If you need help, reach out. We can help you with action steps.

2. Even in organizations that affirm women in ministry, PAY ATTENTION. How do they speak about women? And if women aren't holistically honored, respected, believed and treated with dignity, speak up.

a. Example: women are not to be referred to as 'my hot wife', 'my babe' or whatever patriarchal, objectifying nonsense so many alleged-egalitarian churches uses to seem hip & cool. There is nothing cool about objectification, dismissiveness & condescension.

b. Unfortunately, this is not limited to our conservative siblings. The self-professed Progressive side of the aisle is guilty of creating unsafe space. If you're in a Progressive church, that doesn't make for a safe space for women.

3. IF you are still wrestling with a woman's role as pastor and leader, educate yourself. Do not stay stagnant and indifferent about the issue, because who knows what victims are piling up as you wait to figure out where you stand.

a. I cannot imagine a world where I am not led by, encouraged by, inspired by, challenged by and taught by women. That is literally removing 50% of the world from a leadership role, and if you think that encourages diversity, think again. And if you think that sounds like God, get a different god.

b. If you need direction on resources, reach out. We can help point you towards some women that we’re listening to and learning from.

Friends, our women & non-male siblings have waited far too long to be seen, affirmed and considered for leadership. There is no more time to spare. This is our time. If we’re to keep the church together for the next century, this is something we cannot waste another second on. Get out of the Protestant churches that will not hire or ordain a woman, and submit yourself to some non-male voices. It’ll change your life, and it’ll change the trajectory of American Christianity which, I think we can all agree, is headed towards a cliff for all the right reasons. Godspeed!